Alexander's Reviews > Leading with Love and Laughter: Letting Go and Getting Real at Work

Leading with Love and Laughter by Zina Sutch

Zina Sutch and Patrick Malone are impressive in how they just go for it proverbially with their brand of corporate philosophy in Leading with Love and Laughter. The subtitle of the book reads Letting Go and Getting Real at Work, and like the title it fits the book’s straightforward and purposefully simplistic delivery. Sutch and Malone aren’t interested in trying to push what one could call their anti-traditionalist, radical-to-corporate conservatives philosophy in neutered or watered-down prose to fit the widest possible audience. They’re preaching to a very specific choir, specifically a millennial-centric set of generations, and as a result the book is refreshingly unguarded and concise in terms of language choice and in terms of conceptual presentation. In the spirit of similar, post-modernists’ positions on leadership - be it within a professional or personal capacity, perhaps both - it all boils down to almost overly holistic and altruistic ideals and tenets that, if literally applied, will redefine the very nature of the term ‘workplace’. “That feeling we get when we love, or when we’re loved, is like no other,” Sutch and Malone write in one of the book’s key ruminating passages. “Some may describe it as a warm, cozy feeling. Others claim it feels like nausea. It’s actually both. And when love is absent in our lives, we experience feelings as well: emptiness, loneliness, even illness. Love has a way about it, physiologically and psychologically.” They go on to elaborate that holistic ideals like their definition and description of ‘Love’ aren’t antithetical to the colder, more pragmatic concepts of ‘success’, ‘industry’, being ‘prolific’, and being ‘proactive’. They may, however, do harm to the age-old ideas of business being the snake pit, and said idea of the snake pit being for the strictly certifiable ‘cutthroats’. Sutch and Malone go on to elaborate that coming at a bare minimum from a place of empathy, particularly if one holds a position of power, is mandatory for running a smooth enterprise in today’s times. This is essentially a more detailed articulation of the ‘top down’ argument, debunking the company’s exclusion of its unifying vision and revelations to a certain echelon, or level. Rather, it’s all about keeping everyone - from the lowest position to the highest and most desirable - equally invested and informed about goals, commitments, and prospects making up the entirety of the business enterprise.

In the spirit of this, Sutch and Malone summarize: “Imagine being in a workplace where you hear words like these spoken by your colleagues: ‘We all gelled right away’ and ‘It was just real chill, like a family atmosphere, just genuine love.’ When asked what made the environment so great, the response was, ‘We’d have these long conversations about . . . anything.’ Or, ‘It was pretty cool to see how we would all get super-focused and locked in. It was really fun with this group. We got so close and had each other’s backs. Everybody was genuinely happy for each other and having so much fun.’” The fact again that words like ‘love’, ‘happiness’, and ‘laughter’ line each and every argument within this specific leadership advice guide reinforce Sutch and Malone mean business - but in the most appropriately maudlin of ways. This is the future, they argue. It’s time for the old dinosaurs and the burgeoning professionals to learn new ways…

Zina Sutch and Patrick Malone’s new book is something that you don’t initially know what to expect from, but quickly turns out to be something you didn’t know you needed. The book is equal parts leadership advice guide, inspirational read, and interactive reading experience. The concepts it promotes, while arguably to be applied within a distinctly corporate framework, can also be carried out to fruition within one’s personal life. In essence, the book is the duo’s literary argument for leading one’s life and those around one’s self with a sense of joy, optimism, and enthusiasm. Nurture no longer bears the kind of flippant, shall we say ‘snowflake’ qualities the old guards of industry once tried to brand it with. If anything, the opposite has proven to be the name of the game. Industry leaders and large-scale corporate enterprises are beginning to both adopt and reintroduce more decidedly right-brain, almost spiritual and deliberately holistic elements to their respective approaches.

All this Sutch and Malone salute the efforts of, because as far as they are concerned, a joyful environment is synonymous with a productive one — no matter what the context. “Leaders…with a keen sense of humor, are accomplished, have high standards, hold employees accountable, coach, develop, and serve as role models,” Sutch and Malone write. “You too can be one of these leaders by embracing a little comedy, being courageous, being humble, being able to laugh at yourself with others, and having the social awareness to understand when and how to provide this safe space where the humor is appropriate and not offensive.” They go on to elaborate: “It’s about truly letting go of some of the uptightness with which we carry ourselves. When people can laugh together, a bond is created by that experience, a closeness, a trust. Laughter creates a communal space and a feeling of belonging. Employees and bosses become part of the same team.”

Such sentiments are indicative of a considerably post-modern rhetoric. But such an approach is being embraced in all aspects of industry around the country as we speak. Whether or not you agree, this is a thing, and this is the future. That is the one place where Sutch and Malone don’t hold back, and don’t come across as such a light set of presences. As much as the book highlights in candid and uplifting prose the specifics of the tactics and methodologies ultimately promoted, there’s also no denying the sense of urgency with which Sutch and Malone present the fundamental cruxes of their ideas. It’s particularly crucial to adapt within a world that is continually plagued with scandal — be it in the forms highlighted by the #TimesUp Movement and the #MeToo Movement, advocates for equal pay, Dr. Stacy Smith and the Annenberg Inclusion Initiative, and with that the rise of the Inclusion Rider concept itself.

But in spite of such astute seriousness on this front, Sutch and Malone are quick to reign in the topicality and focus of their philosophy to the more light aspects of maintaining said atmosphere(s). In their words, shamelessly even, it just makes thing so much more fun. It engages everyone in the workplace in a sense of shared enthusiasm, everyone playing key parts in helping the ship reach the respective port. It’s that part of the read that really makes it genuinely appealing, and that Sutch and Malone craftily leave you thinking about as much as you are with respect to everything else. It makes for a nice change from the more high-handed and preachy tonal balances so-called ‘experts’ in various business fields often proselytize from. While the evidence-based theories and expert observational tendencies are very real in a data-backed, presentational form — it’s Sutch and Malone’s affability that drives the points home so effectively.

Zina Sutch and Patrick Malone make for an interesting pair, literarily speaking. Their new book is, Leading with Love and Laughter: Letting Go and Getting Real at Work. If its title isn’t indicative of the approach they take in elaborating on their specified brand of concepts and leadership approach, I don’t know what is. Being somewhat of a traditionalist in how I view industry, I was initially a bit skeptical picking up a book with such a distinctly emotive tonality. It didn’t seem entirely fitting, nor proper given my penchant for probably outdated, semi-old-fashioned views of how to articulate the fast pace that is the (professional) rat race. The corporate jungle to me has always been representative of cold, gleaming steel, tall buildings, getting ahead without (legitimately) stomping on too many exposed throats, and all-in-all maintaining a clear barrier between my intrinsic humanity pertinent to my personal life with the coolness that comes with keeping my job.

But these two managed to win me over. The book doesn’t actively seek to convert you – the hypothetical reader – regardless of your preexisting ideology. It definitely speaks to a very distinctive audience, which is helpful – both for (you) as time isn’t spent on argumentations designed to win you over, and it simultaneously shines a light on what young people entering the workplace today may expect. There also is something to the argument, particularly in an exponentially expanding world of massive, technological possibility, for employees of all stripes maintaining continuity. It’s easy to become lost or overwhelmed by how elaborate things have become, and more and more in an odd sense this ironically has helped bring people in some ways together. The man in the biggest room no longer enjoys, on a purely necessitated sense, a certain and exclusionary group of individuals on his so-called ‘level’. The playing field has been evened out to such a degree that everyone – from the janitorial sectors to the highest levels of decision-making within an enterprise – mandates knowledge. Knowledge that unites top and bottom in helping to solidify the entirety of what the enterprise seeks to achieve, reach the pinnacle of, and preferably soar from.

In less able hands, the book would easily come across as faux-intellectual, maudlin drivel. I mean, I’m a self-confessed traditionalist. It is very hard to convince me these days that much of anything is heading in an even more positive direction than it already was when it comes to the base technicality of things. But Sutch and Malone did it – they’ve helped put a genuinely human face on something that one would initially consider an anathema-laden approach to effective corporate leadership. They’ve helped make a series of decidedly right-brain, intangible concepts tangibly articulated. There’s no messing around or overstating of the obvious, but also no fear on the authors’ parts of simply letting the more altruistic set of flags fly. Again, it’s a testament to how they write that such well-meaning, ultra-visceral modern psychological tactics seem applicable in a straight-faced, wide-ranging medium.

Job well done, if you ask me. I’d be curious to see more of their work, and would like to continue following their new exploits. Whatever imperfections you could argue still permeate small aspects of the read are easily redeemed by actual, genuine insights and a strong sense of inherent positivity. It’s a nice thing to see and read in a nonfiction sub-genre often dominated by decidedly cold and flinty presentational qualities. All in all, a solid achievement and guide to the new 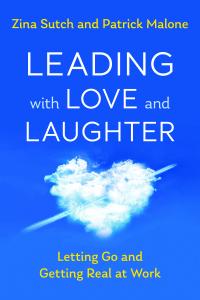 Leading With Love and Laughter: Letting Go And Getting Real At Work